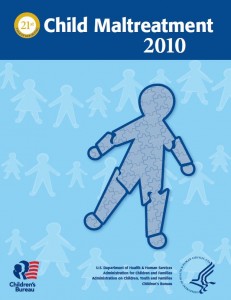 (Reuters) – Children exposed to family violence show the same pattern of activity in their brains as soldiers exposed to combat, scientists said on Monday.

In a study in the journal Current Biology, researchers used brain scans to explore the impact of physical abuse or domestic violence on children’s emotional development and found that exposure to it was linked to increased activity in two brain areas when children were shown pictures of angry faces.

Previous studies that scanned the brains of soldiers exposed to violent combat situations showed the same pattern of heightened activity in these two brain areas — the anterior insula and the amygdala — which experts say are associated with detecting potential threats.

This suggests that both maltreated children and soldiers may have adapted to become “hyper-aware” of danger in their environment, the researchers said.

“Enhanced reactivity to a…threat cue such as anger may represent an adaptive response for these children in the short term, helping keep them out of danger,” said Eamon McCrory of Britain’s University College London, who led the study.

But he added that such responses may also be underlying neurobiological risk factor which increases the children’s susceptibility to later mental illness like depression.

Depression is already a major cause of mortality, disability, and economic burden worldwide and the World Health Organization predicts that by 2020, it will be the second leading contributor to the global burden of disease across all ages.

Childhood maltreatment is known to be one of the most potent environmental risk factors linked to later mental health problems such as anxiety disorders and depression.

A study published in August found that found that people who suffered maltreatment as children were twice as likely as those who had normal childhoods to develop persistent and recurrent depression, and less likely to respond well or quickly to treatment for their mental illness.

McCrory said still relatively little is known about how such early adversity “gets under the skin and increases a child’s later vulnerability, even into adulthood.”

In the study, 43 children had their brains scanned using functional magnetic resonance imaging (fMRI). Twenty of the children who were known to have been exposed to violence at home were compared with 23 who had not experienced family violence.

The average age of the maltreated children was 12 years and they had all been referred to local social services in London.

When the children were in the scanner they were shown pictures of male and female faces showing sad, calm or angry expressions. The researchers found that those who had been exposed to violence showed increased brain activity in the anterior insula and amygdala in response to the angry faces.

“We are only now beginning to understand how child abuse influences functioning of the brain’s emotional systems,” McCrory said. “This research…provides our first clues as to how regions in the child’s brain may adapt to early experiences of abuse.”